How To Turn Being Broke into a Unit Study or Depressions Don’t Need To Be Depressing!

I want to re-mention the influence I had from my mother, then 92 years of age, and my grandmother, who died back in 1922. Two weeks after writing the previous article, my mom passed away. Naturally, I’ve spent the last few months reassessing all the things I learned from past generations. After all, now it is time for me to take up that mantle . . . now I’m the older generation!

One of the most powerful lessons I learned from my parents was the ability to live with few material possessions. It certainly is a helpful lesson for getting us through the current economic situation. The generation that lived through the Great Depression took care of whatever they had. In my mother’s household, it mattered which way you rolled the cord up for the toaster; how often you oiled the moving parts on the sewing machine; which way the pots were stacked in the cabinet. Everything was done for one purpose: To conserve resources and keep everything in good shape. Nothing was ever thrown away. When socks got holes in them, they were darned. When they finally gave up the ghost, they became rags for dusting. When clothing was outgrown, it was passed down to the next child, and the next, until the family ran out of children. At that point it was cut up into squares to make a quilt. The buttons were cut off and put in the button box. The zipper was carefully removed and sewn into the next garment. 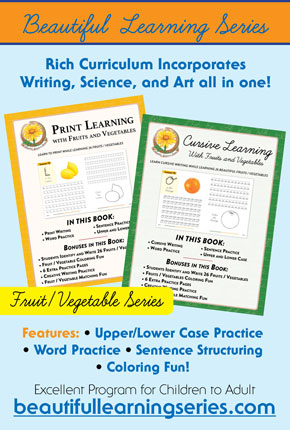 There were no pre-packaged meals back then. When we went to the grocery store, we walked and used a cart to bring back the groceries. We only bought staples: Lots of potatoes, noodles, and rice, fresh fruits and vegetables, and the occasional small piece of meat for protein. We didn’t need to have memberships at health clubs to stay in shape, because we walked almost everywhere we went, and had plenty of strenuous chores to keep our muscles in shape.

I think growing up in this environment was what drew me to homeschooling in the first place. When our kids were little, the movement was still young. We didn’t have any curriculum fairs, catalogues arriving in the mail, or support groups available. We had to decide on our own, goals for the children and their education, and then figure out how to achieve them with few resources at our disposal.

Like many homeschooling families, we were pretty broke back then. As most of you realize, even in good economic times, it is hard to make it on one income. Most of us struggle in some ways. Early on, I realized that there had to be a balance. Yes, academics were important, but other skills were just as valuable. We didn’t have any money to spend on curriculum materials. Most of our academics centered around the use of the public library. We read constantly. That’s the kind of education that Abraham Lincoln had, and it served my oldest children well. Other than reading, most of our education was achieved through establishing what others have called a “lifestyle of learning” . . . which leads me right back to many of the things I had learned in my parent’s home.

Since the economy has been in freefall, I’ve received a lot of letters from homeschoolers who doubt their ability to continue teaching their own kids at home. You don’t have to worry. Feeling the pinch will simply force you back into examining what really is important and what isn’t. Do you really need all of those outside classes? Do you really need a full set of textbooks? Do you really need a “fully accredited program” or a set of DVDs to do the teaching for you? Of course not. Everything you need to help your children become fully educated can be obtained for free, or with very little money.

Start by staying at home a little more and driving a lot less. When you do go out, search for free or inexpensive community resources: Community sports, theatre groups, 4-H or scouting programs. Start mornings with family reading time, using books from the public library, and spend the rest of the day helping the children learn some of the skills that are timeless and will help the family conserve funds. Start a garden, join a food co-op, grind your own wheat, bake bread from scratch, get a sewing machine and start making your own clothes again. Turn the whole thing into a unit study and get your kids involved.

One of the best things you can teach your kids at this time, regardless of their age, is a little bit about economics and personal finance. One of my pet peeves is the tendency to blame the current president, or a particular party, for everything that is wrong economically in the country. A couple of years ago, everybody blamed Bush. Then before Obama hadn’t even taken office yet, people were already starting to blame him! Blaming a single man, or a small group of men, is clear evidence of economic illiteracy. Anyone who has studied economic systems and cycles knows they are far more complicated than this.

To understand what is really going on, the first thing to do is to recognize that the real root of the problem is the failure of modern society to observe the “year of jubilee”.  God told the Hebrew people to set aside every fifty years to give back all debt. He did that because He knew that, when debt is free to continue compounding, the exponential curve kicks in after about sixty or seventy years, and things spiral out of control, until a major fall becomes inevitable. I’ve been talking about that for the past ten years already . . . so this thing hardly was a surprise to me. Of course, if we did observe a year of jubilee, the banks would have to give back your mortgages, and Master Card would have to forgive all debts. It’s not too likely anyone will be willing to go along with that, so I guess now we are just going to have to face the consequences.

Besides learning a little about economics, and the differences between socialism and capitalism, be sure to use this opportunity to teach your children about personal finance.  An excellent place to start is to read some of Dave Ramsey’s materials. Start with his older book, “Financial Peace” (ISBN 0670873616). If you’re really in trouble financially, and you’re ready to make some serious changes in the way you do business, read his more recent book, “The Total Money Makeover” (0785263268). While you’re reading, get the book, “We Had Everything but Money” from Country Magazine (ISBN 0898210992). It contains a series of vignettes from people who not only survived the Great Depression, they thrived! It is a great source for inspiration, as well as containing some practical tips that are still valuable in today’s world.

Finally, while you are trying to figure out how to make it through the tough economic crisis we are in (periodically), put those homeschooling caps on and think of a way to generate some extra income as a family project. There’s a great book called, “The Accounting Game”, which uses the example of a lemonade stand to teach accounting principles. (I don’t know the ISBN . . . it is white, with colorful stripes on it, can be found at many bookstores, and I think it might be published by Source Books . . . “lemonade stand” is in the subtitle.) Use that as a basis for a unit study on accounting and actually do the lemonade stand (or choose a different project). You know, children can’t work for other people in this country until they are at least fourteen or so . . . but there isn’t a single law on the books (that I’ve ever heard of, at least) that stops the youngest children from starting their own business! My first business was started when I was still a teenager, making leather goods during the “hippie” days . . . leather bags with beads, vests with fringes, and leather jewelry using the scraps from the vests. Since that time, either I or my kids have had stuffed animal businesses, pet-sitting businesses, guitar teaching businesses, and lots of other enterprises. Most recently, I formed my own L.L.C. to do real estate transactions and just signed an independent contractor agreement to do appraisal work. There is always something to do, some way to make it through. The most important thing is your own attitude.

In my book, “The Enthusiastic Homeschooler”, I related the story of sitting in my bathtub, (the only place most homeschooling moms can have a moment alone), and considering the importance of attitude. I could sit there bemoaning the fact that I don’t have a Jacuzzi, or a bay window, or a nice potted fern . . . or I could sit there and say, Wow! Hot running water right inside the house. What my grandmother wouldn’t have given for this!!! Whenever you’re tempted to get depressed over money issues, remember, the most important things in life have nothing to do with money. You’ll get through this, just like my mom got through the Great Depression, just like my grandmother managed to raise five kids without indoor plumbing or electricity. That’s the beauty of homeschooling — whatever happens, you can always turn it into a unit study!

Should You Force Your Child To Take Music Lessons?